A question plumbers often ask us is the difference between Standard and Barrier pipe. Our push-fit plastic plumbing system Hep2O is available in straight lengths or coils in both Standard or Barrier pipe, both of which are accepted by British Gas/Scottish Gas Central Heating Care Contracts. In this post, we take a look at the key features of each.

How is straight pipe available and when should you use it?

Straight lengths of Hep2O Standard and Barrier pipe are supplied in 3m lengths in 15mm, 22mm and 28mm diameters. Straight pipe is just as flexible as coiled pipe and is primarily intended for exposed pipework where neatness is vital or where only a short length of pipe is required.

The difference between Polybutylene (PB) and Cross-linked Polyethylene (PEX) pipe

There are two main pipe materials on the market, Polybutylene (PB) and Cross-linked Polyethylene (PEX) and both have different properties.

PEX pipe is relatively stiff and when taken from the coil retains a ‘spring’ like quality, which can make it difficult to work with, particularly on long runs and when cabling through joists or floors.

Polybutylene, in comparison, is cured on massive drums, and the plastic memory means that when you uncoil it is lays flatter, as seen in the image below. It’s also very flexible, so easy to work with in all situations. Hep2O pipe is all PB. 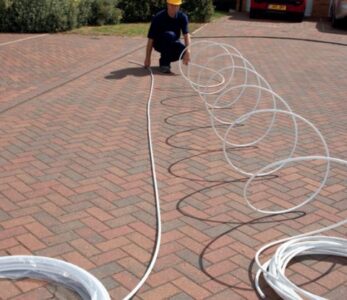 A unique characteristic of Hep2O pipe coil is its remarkable ability to remain straight once uncoiled, unlike some other plastic materials which act like a spring and makes handling so awkward that two men may well be required to carry out a relatively simple job. Hep2O pipe is much easier to handle and much easier to cable because of its inherent tendency to stay where it’s put.

• Choice of Standard or Barrier pipe
• Uncoiled pipe retains its flexibility
• For installations into screed, use the Hep2O ‘Pipe-in-Pipe’ system. This incorporates Hep2O Barrier pipe in a pre-sheathed conduit as seen below.

Note: Hep2O pipe is NOT suitable for conveying gas, oil or underground supplies.

Still have a question about Hep2O? Drop us a line and we’ll get back to you.