When should AquaCell soakaways be used?

Recent changes to legislation along with an increase in flooding have forced building developers to reconsider how water is managed within their developments. In turn, this has prompted designers to rethink how to manage water using Sustainable Drainage Systems (SuDS) such as our AquaCell crates. In this article, we look at how our AquaCell systems were used in the development of Oxford's Barton Park.

SuDS mimic Mother Nature in urban environments where there’s less permeable ground for infiltration. When rain falls on surfaces like pavements and car parks, risks of flooding and erosion are increased because water has nowhere to runoff and drain away, so SuDS can be installed to manage rainwater levels. Find out more here.

Our AquaCell systems were recently specified for use in Barton Park, a development in Oxford that will provide 885 new homes, with the first residents moving in summer of 2017.

From the early days of planning, Oxford City Council were determined to incorporate water management through appropriate flood protection. The Barton Park action plan stated that SuDS should be specified, not only to manage water quantities, but also improve water quality and create biodiversity, all of which are key factors in improving the environment of the development.

In order to reduce run-off volumes, the designers realised that a significant volume of water attenuation capacity was required and chose to create a below ground structure using modular plastic geocellular units. 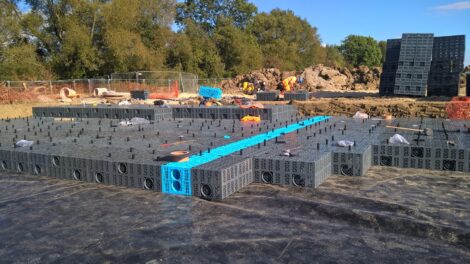 Structures such as this are formed of two elements; the skin and the structural element. The skin in this instance was an impermeable geomembrane designed to prevent water escaping from, or entering, the tank.

The structural element consisted of a combination of Wavin AquaCell Prime and Plus geocellular units. These are high void (96%) structural units designed specifically for these applications.

To achieve this, the AquaCell Plus units were installed as rows within the structure to form a continual tunnel from one end of the tank to the other and accessible through inspection chambers.

Using this tank design has resulted in around 3000 cubic metres of attenuation capacity being integrated into the SuDS scheme for the development, helping protect the new residents from flooding now and into the future.