The National House Building Council (NHBC) Foundation acknowledges that noisy pipework can cause misery for home owners. In fact they found that 15% of all noise complaints made by home owners in detached properties were caused by the pipework.

The National House Building Council (NHBC) Foundation acknowledges that noisy pipework can cause misery for home owners. In fact they found that 15% of all noise complaints made by home owners in detached properties were caused by the pipework.

The problem with noisy pipework

The change in temperature caused by the flow of hot and cold water through the pipes can cause expansion and contraction of the pipes causing creaking and movement of the pipes in the brackets. This sound is transmitted through the structures and can be particularly loud and annoying.

Soil stacks can cause creaking noises and pipe movement but it isn’t something that homeowners should have to just grin and bear. A revision to part E of the building regulation (2010) addressed this issue by stipulating a maximum of 45 decibels as a daytime average for sanitary noise in new and refurbished residential properties. There are a number of simple steps that installers can take to reduce noisy pipework.

Simply ensuring for the expansion and contraction movement when installing soil stacks is routinely used to combat the noise created by thermal movement but in practice, measuring expansion gaps can be fiddly and time consuming for the installer. 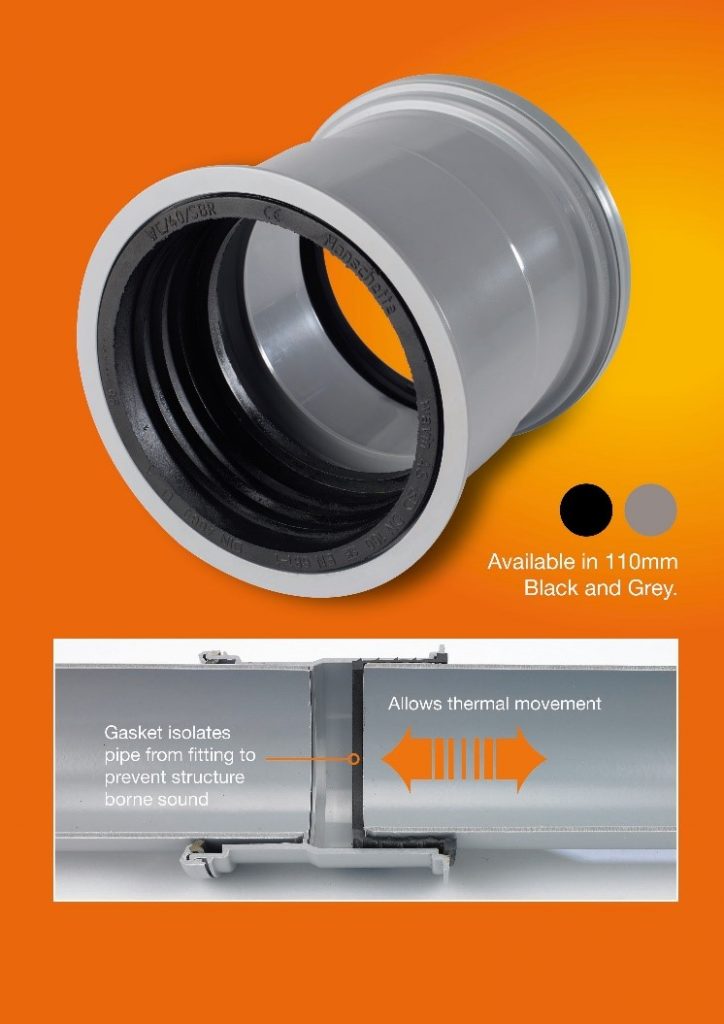 The Osma acoustic coupler can be used to replace a standard coupler to connect pipe or other fittings including branches and access pipe fittings. It has been designed to limit structural borne sound and noise from thermal movement in soil stacks and contact between the stack and the structure of the building, while at the same time allowing for an easy, quick and reliable installation. When installed on every floor, it limits the effect of noise transfer between pipes separating walls and floors.

During and after installation the expansion gap should be retained. This can easily be checked if the acoustic coupler has been installed with access. Simply removing the screwed access cap will allow a visual inspection of the expansion gap by both the plumber and building inspector to ensure a reliable installation.