What is urban flooding and how does it affect us?

Climate change is altering precipitation patterns across Europe and across the globe. Every year, rainstorms and flooding events are increasing in both frequency and severity and, in recent years, the end of May/early June mark the beginning of flood season. In this article, we take a look at the causes of urban flooding and how it has become a crisis of our times.

The challenges of climate change

With municipal water utilities already strained by decades of underinvestment and aging infrastructure, they now face a whole new spectrum of challenges due to climate change, growing urban populations and legacy drainage and sewer systems which are inadequate for handling the rainfall levels we see today.

Yet many communities are still failing to take these factors into account when planning for the future and government policies aren’t always being crafted with these risks in mind. More often than not, these policies, practices and decisions are steeped in the past, relying on historical data and ignoring the threats posed by a rapidly warming climate.

In contrast, careful climate-minded planning can make a city more resilient. In this context, the Intergovernmental Panel on Climate Change (IPCC) defines resilience as “the ability of a city to pursue its social, ecological, and economic development and growth objectives, while managing its climate risks so as to create and maintain a sustainable city that is capable of not only adapting to climate change, but also circumventing it.”

Resilience also has to do with the ability to recover and to ensure vital infrastucture to function during extreme events. These climate-resilient cities of the future will be determined by the engagement and decisions that municipal leaders, urban practitioners, innovators and community residents make today.

This article is an excerpt from our latest whitepaper, ‘The role of stormwater management in building a sustainable climate-resilient city’. Request your copy here.

The causes of urban flooding

Urban flooding occurs when water flows into a city or town faster than it can be drained, absorbed into the soil or moved to and stored in a man-made lake or reservoir.

The four different causes of urban flooding are:

Watch videos from our 2015 debate on ‘Why the UK Won’t Be Ready For The Next Big Flood’ below.

Urban flooding is an urban crisis

Urban flooding caused by heavy rainfall can quickly escalate into a full-scale urban crisis. Power outages, road gridlock, business disruption and unclean water are just a few of the problems that can wreak havoc in an urban community. The costs (damage to buildings, vehicles, furniture, infrastructure, lost business) become astronomical. To put things in perspective, 2012 was a record-breaking rain-soaked year in the UK totaling 1,330.7 mm and costing the country’s economy £600m.

Agriculture was the hardest hit, costing a total of £1.3 billion, according to the National Farmer’s Union (NFU). One year later, the UK was hit by severe winter storms from December 2013 to January 2014 – causing power outages and major disruption to transport. The heavy rain caused a flood phenomenon and the UK was hit by all possible flood types: pluvial, coastal, fluvial and groundwater, as seen in the visual below. 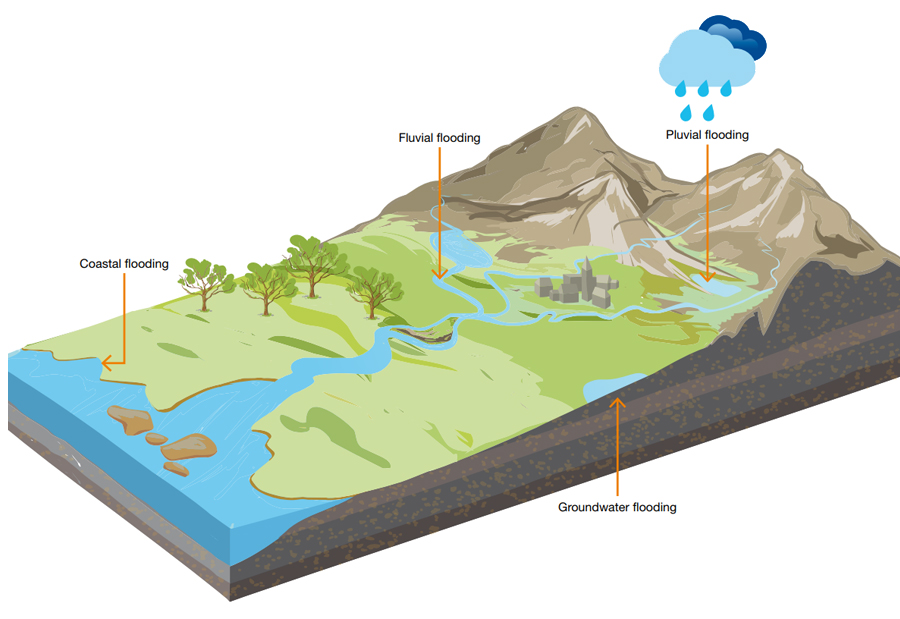 One of the greatest misconceptions about flood risk is that one must be located near a body of water to be at risk, but pluvial flooding can happen in any urban area, regardless of the elevation areas that lie above coastal and river flood plains.

When rain saturates an urban drainage system, the system becomes overwhelmed and water flows into the streets and nearby buildings and homes. This is especially noticeable when the drainage infrastructure is old and in need of repair or replacement. When the water flows (and rises) into the streets, it may cause damage to cars, homes and/or buildings.

Additionally, there are the potential health hazards from flow velocity and possible pollutants contaminating the water or from downed power lines that may not be visible under the flood water (the potential fatal danger of electrocution if one inadvertently steps on a live wire that is wet). There are also the inconveniences, like power outages, business closures and disruption of transport services.

Although many cities try to be proactive by issuing storm warnings/alerts, the fact remains that urban areas need to focus more on the root problem: the lack of resiliency in their drainage and sewer infrastructure and the need for progressive, sustainable alternatives for filtering, receiving and storing rainwater.